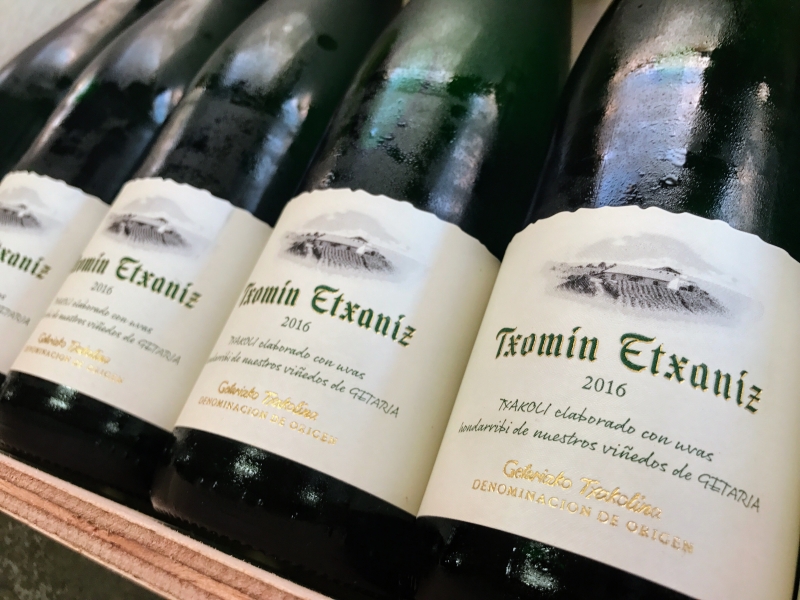 Bringing light to the lesser known wine styles and grape varietals out there.

Txakoli is a white wine produced in the Spanish provinces of the Basque Country, Cantabria and northern Burgos. Predominantly made with Hondarrabi Zuri Grapes – Zuri meaning “white” in Basque.

Txakoli is light in alcohol, slightly sparkling and dry resulting in a perfect aperitif style white wine, usually consumed in the Summer throughout Basque country. If you have ever walked into a Pintxo Bar in San Sebastián or Bilbao and you’ll see an entire walls of green bottles. These areas are famous for Txakoli and over 80% of the total production of Txakoli is consumed in these areas in the hot summer months.

There is often a slight spritz in the glass, a result of the carbon dioxide produced during fermentation being absorbed by the wine, which is covered by a thick veil of nitrogen leaving the CO2 nowhere to go.

Like higher end Muscadet, the best wines of the region spend some time resting on the lees, adding a roundness to the otherwise crisp, tangy and mineral style.

With flavours dominated by apple and citrus, these wines can make off-beat alternatives to more well-known names like Muscadet, Vinho Verde and Picpoul de Pinet.

Ageing/cellaring these wines is not recommended as they are designed to be drunk within one year of bottling.

From 35 hectares of vineyards overlooking the Atlantic in Basque country, Txakoli is a regional speciality that sits in the same spectrum of freshness and crispness as Muscadet and Vinho Verde. On the nose there are aromas of dough and citrus, while the palate has a really appealing appley acidity.